Home | General Interest | History And Knowledge | Aircraft Of The Raf

Aircraft Of The Raf Magazine

Since the service was formed in 1918, the RAF has operated more than 590 different types of aeroplane, helicopter and seaplane. 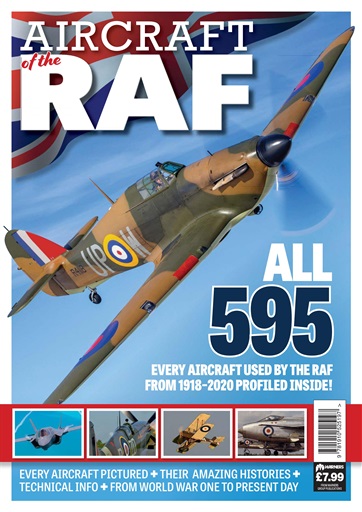 Aircraft of the RAF tells the story of all of those machines and the servicemen and women who have flown them, built them, maintained them or supported their operation in both peacetime and war. Using a mix of archive images and contemporary photographs this 132-page special collector's magazine tells the story of the RAF from the flimsy canvas INSIDE 'AIRCRAFT OF THE RAF' ¢ The Force Awakens ¢ The Roaring 20s ¢ Record Breaker to Ambulance ¢ Beardmore Inflexible ¢ Water Birds ¢ Fairey´s Long Range Monoplane ¢ Bristol´s High Flying Monoplane ¢ On Silver Wings ¢ The Need for Speed (1920s) ¢ The Mother of all Drones ¢ The Last Biplane ¢ Camouflaged and Impressed ¢ From Airliner to Bomber ¢ Landing by Moonlight ¢ From Flop to Legend